One of our recommendations in the category
"Affair dating": 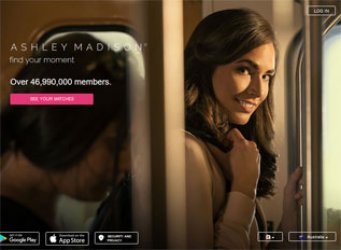 The Canadian affair dating service AshleyMadison has been operating for over 10 years and is currently the most internationally well-known affair dating agency. Over 36 million affair seekers have already registered here!

The principle behind AshleyMadison is simple: you register, create a profile and then search for other affair seekers.

Why must the biggest affair dating site in the world hoax its customers?

Since autumn 2010 this dating site was advertised cheekily through the media and radio. Thus far around 1 million Australians have tried it out.

You can put photos in a secret area and give your preferred affair partners a key with which to open this area.

AshleyMadison.com was hacked in 2015. This confirms what we’ve aways written: all men are contacted by fake female profiles. The email addresses of 32 million members were also published. Cheaters! How things will continue with AshleyMadison  is unclear.

The price model does not include a time-restricted flat rate, which can be found on other affair dating sites. Rather, there is a system of credits: You acquire a ‘credit package’ with which you pay for specific functions. That’s pretty inconvenient. In our test we also got tempting messages from ‘women’ who were only trying to lead us to the checkout.

The Good Stuff at AshleyMadison.com

There is an easy-to-use interface and one that is quite clean, simple and rather innocent looking (when you first login, of course). This, as it would seem, helps the website to live up to its aspiration of discretion. You will see most of the standard features of any dating site on AshleyMadison, such as favourites lists and special block lists should you wish for someone to stop messaging you.

There is another interesting feature for women and men available on the site: the Travelling Woman/Travelling Man application was created in order to help people on the go to find others in the area they are traveling to.

You can search using a number of different specifications including language, ethnic background, body-type and of course where you're going. In the profile, you can describe your ‘perfect match’ by choosing from a list of different factors and attributes. There is also a place where you can list your ‘intimate desires’. What is also quite useful is that:

Only members can allow other members to see their private pictures.

This often involves giving the other member a ‘key’ so that they can look any time. This privilege can be revoked by the owner whenever he or she wishes.

As a good privacy measure, you can put your profile photos in a ‘private gallery’ and only provide them to those who ask. These photos will not be shown on your profile.

Warning: Online Cupids (Fake Profiles) Have Been Among Members Since 2013!:

There is a high quota of men (82%). That’s not good: even for an affair dating site. It’s also a pity that couples cannot register. The credits system (a virtual present for a single person costs, for example, 20-50 credits) reminds us of the business model of a brothel. Women receive no benefits. That’s fair enough, though that doesn’t make for a very high percentage of female members: that’s what the AshleyMadison experience of our users in Australia showed us.

The naughty world of AshleyMadison

AshleyMadison was last tested September 2022 with3

At AshleyMadison every mail costs 4 euro. As a result, women are not spammed as often. But watch out: there are fake profiles that have been set up.
Top