One of our recommendations in the category
"Dating for married people": 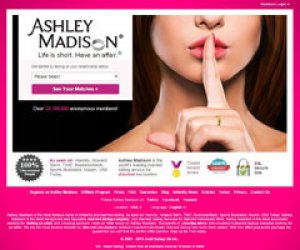 When it comes to married dating, AshleyMadison is the most popular discreet dating service in Australia. Unlike adult dating sites, the focus on AshleyMadison is infidelity. Launched in 2001, it has only grown in popularity and hence we have decided to write a review. We see it as...

Based in Canada, AshleyMadison boasts around 36 million members and is owned by Avid Life Media. As well as being available in Australia, AshleyMadison can also be found in many other countries across the globe. Just some of these include Ireland, New Zealand, Germany and Portugal. For anyone who feels like spicing up their lives with an affair on the side, you have come to the right place.

When you first login to AshleyMadison, you'll find a clean and easy-to-use interface with a classy look. This, as it would seem, helps the website to live up to its aspiration of discretion. You will see most of the standard features of any dating site on AshleyMadison, such as favorites lists and special block lists should you wish for someone to stop messaging you.

There is another interesting feature for women and men available on the site: the Travelling Woman/Travelling Man application was created in order to help people on the go to find others in the area they are travelling to.

You can search using a number of different specifications including language, ethnic background, body-type and of course where you're going. In the profile, you can describe your ‘perfect match’ by choosing from a list of different factors and attributes. There is also a place where you can list your ‘intimate desires’. What is also quite useful is that:

Only members can allow other members to see their private pictures.

This often involves giving the other member a ‘key’ so that they can look any time. This privilege can be revoked by the owner whenever he or she wishes.

AshleyMadison strives to put an emphasis on discretion among its users. After all, it is a website where people in relationships are looking for extra-relational affairs and sex. When setting up your profile, if you are interested in keeping it an absolute secret, you may want to have a close look at your settings. AshleyMadison does tend to send a lot of emails, so unless you disable this you may end up being found out. When it comes to billing and payment, discretion is also used. With AshleyMadison, it is clear to see that having an affair has never been easier.

According to Australian users experience of the site (including our own), AshleyMadison has a somewhat pleasant atmosphere. Many of the other users are respectful and charming, so it doesn’t appear to be as sleazy as one might think. Of course, this is a website for affairs, but its members still appear to be of a rather high calibre.

The naughty world of AshleyMadison

AshleyMadison.com was last tested July 2022 with4

AshleyMadison.com is the most popular discreet dating service for married people in USA: over 11 million members have already signed up! Now they are conquering Europe as well.
Top